26 years ago, in 1994, the 14-mile segment of the West Branch Farmington River from Hartland to the Canton/New Hartford line received its designation. In 2019, 1.1 miles in Canton were designated Wild & Scenic making the Upper Farmington River designated segment a total of 15.1 miles.

This section of the West Branch Farmington River were entered into the National Wild & Scenic River System as a result of a great effort by citizens and organizations to protect the river from a proposed diversion and other major water resource projects. The Farmington River is among the first “Partnership Wild & Scenic Rivers” as protection comes from federal, state and local town governments and other organizations with a vested interest in the health of the river.

The establishment of the study area for the Lower section began at the downstream border of the Upper Farmington and went to the confluence with the Connecticut River. Wild & Scenic Rivers are required to flow through free-flowing areas. The sections above the two Collinsville Dams are not free-flowing. The upstream end of the free-flowing portion in Collinsville was determined to be the confluence with the Nepaug River, a very easily identified landmark. The free flowing section from the current Upper segment to the Nepaug is 1.1 mile long. This section, that was included in the Lower study area, was appended to the Upper Section, in order to capture the longer free-flowing section under the Upper Wild & Scenic Management Plan of 1994. The original designation of 14 miles of the Upper Farmington River is now 15.1 miles long.

Our river provides clean water, wildlife habitat, and recreation. It is critical that we work together to protect and preserve this natural beauty. 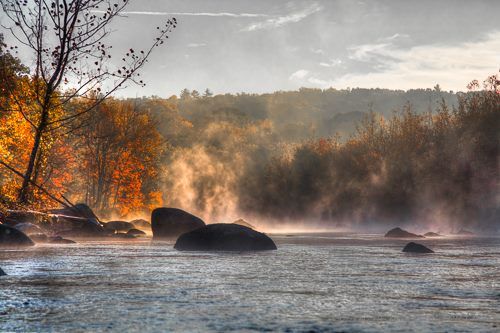 "Promoting the long-term protection of the

In August 1994, Congress added 14 miles of the Farmington River's west branch to the National Wild and Scenic Rivers System. This exciting milestone in the river's history recognizes the Farmington's beauty and character and ensures that it will be enjoyed by generations to come. And there's so much to enjoy! Every year, thousands of people canoe, kayak and fish the waters of the Farmington and visit the state parks, forests and historic mills that dot the river's edge.

The river is also important habitat for wildlife, with otters raising families along its banks and bald eagles soaring above the water in search of a meal for their nestlings. In fact, the Farmington River Valley is currently the only place in Connecticut with nesting bald eagles. And soon, the Atlantic salmon may return to the river after an absence of decades. All these factors - recreational value, rare wildlife, outstanding fisheries, and a rich history - make the Farmington River a natural for inclusion in the National Wild and Scenic Rivers System.

The Farmington River is a Partnership W&S River - which means that local, state, and federal governments as well as other stakeholders in the river community are partners in river management and stewardship. This is a model that other eastern rivers have followed as they have put together management plans.

A BALANCE NEEDED TO BE STRUCK.

After the major water projects of the 1930’s, ‘40s, and ‘50s American rivers were battered. In 1968 President Lyndon Johnson signed the Wild and Scenic Rivers Act providing a mechanism to protect the remaining free flowing rivers.

The Upper 14 miles of the Farmington River West Branch were included as a Wild and Scenic River after a failed attempt in 1981 to divert West Branch waters into the East Branch reservoir system. The Farmington is among the first “partnership river” as protection comes from Federal, State and local interest groups and municipalities. It is classified as a “Recreational” river in the Act.

Join us in celebrating the Wild & Scenic Rivers Act of 1968! Check our calendar for upcoming events and programs in the Farmington River Valley.

WHAT HAS BEEN ACCOMPLISHED?

WHAT ARE THE BENEFITS?